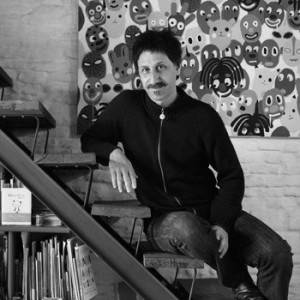 El Lecturón. Gymnastics for readers
Show all books of Bianki

Bianki (Diego Bianchi) was born in La Plata in 1963. He lives since 1999 in the Real de San Carlos, in Colonia. He is an illustrator in independent and current press media; And in book publishers for national and European children. Some of his books in the field of children's literature are Mon petit cheval (France, 2002), Pleine lune (France, 2003), Restoran (Buenos Aires, 2003), Who runs with me? (With Ruth Kaufman, Buenos Aires, 2004) and Candombe, fièvre du carnaval (France, 2005). He was also invited to represent the city where he lives in the hyperlibrodeartista-itinerante of the Place Project (Barcelona). He founded, along with Langer, the visual arts magazines Lápiz Japonés and La Comuna. Since 2003, he is one of the people responsible for the Small Book Illustrated book seal.